Thank you for 30 great years
in Grand Haven, MI!

The Great Lakes Kite Festival has come to a close. We could not be happier with the support of our fliers and spectators during the 30 years we hosted this event. From the bottom of our hearts, thank you.

The beach in Grand Haven continues to be a wonderful place to fly kites. Come on down anytime, find an open spot, and launch your favorite kite.

**Update for 2019** Some of the kitefliers you know and love from GLKF have organized a NEW event! Check out The Kite Festival @ Grand Haven for dates and other info. MACkite is grateful to them for hosting this event- we're looking forward to coming and relaxing!

The Sky's the Limit:

How One Small Business Hosted a Major Event for Three Decades

The seagulls used to have the Grand Haven beach just about to themselves until the Memorial Weekend crowd arrived to kick off summer. But in 1989 that changed as a different type of "bird" took to the skies, at first on Mother's Day weekend and then settling on the weekend before Memorial Weekend.

Bob and Steve Negen had opened the Mackinaw Kite Co. in Mackinaw City just 8 years before and were still newcomers to Grand Haven, having added a shop there in 1986. But that didn't stop them from bringing the fun outside the store and onto the beach for all to enjoy. The Great Lakes Stunt Kite Championships was a nationally-recognized competition that attracted kite teams from all over the country, and later the world, as they competed for titles in categories such as "Team Ballet", "Team Precision", "Individual Ballet", "Individual Precision" and "Innovative". 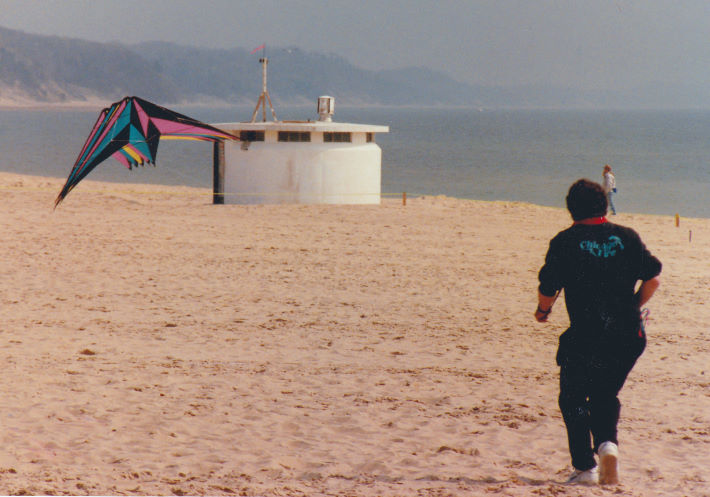 A few curious onlookers braved the cool lakeshore weather to see the unusual spectacle that was kites dancing to music, but the first event was attended mainly by kitefliers and their families. A registration fee for competitors helped offset the competition's expenses, but really it was done as a labor of love by Bob and Steve for the sport. Steve even captained a team of his own, the "Roaring Flamingos". 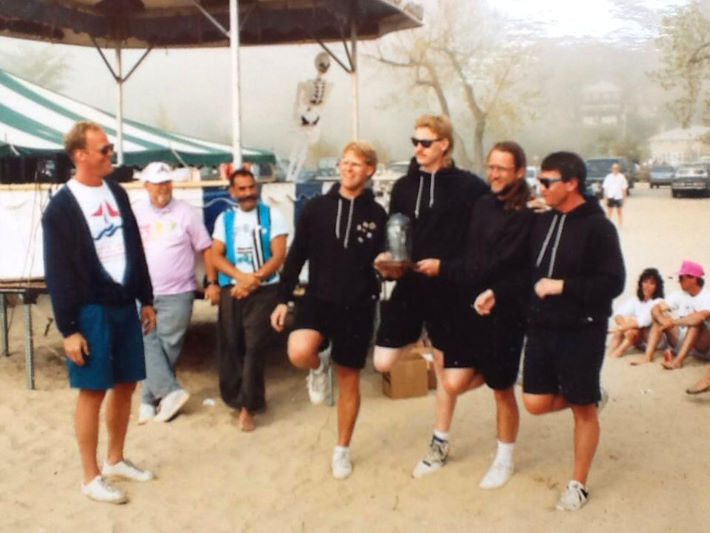 As the Championships repeated each year, the word got out and the crowd swelled from a handful of spectators to thousands who were delighted by the choreography the teams had put together. On a weekend where the parking lot used to be virtually empty, there was now a line to get into the park. Mackinaw Kite Co. had single-handedly succeeded in kicking off summer in Grand Haven a week early. A sales tent was added to help with a portion of the growing expenses. The primary motivation for the event was still the shop's passion for kiting, and they were determined that it would remain free for spectators to attend. 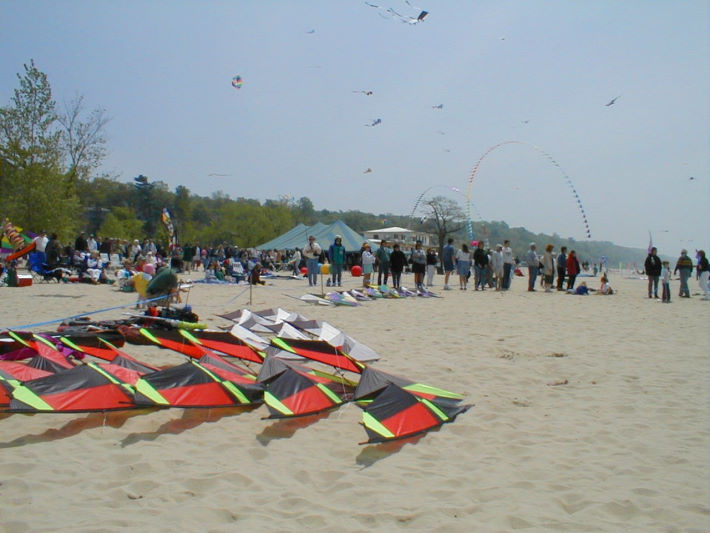 The event, now known simply as the Great Lakes Kite Festival, hit its stride in 2000, when the competitions were discontinued in favor of demonstrations. Without the delay for judging in between performances, the schedule became much more crowd-friendly, with kites in the sky above Center Field at any given moment. Tens of thousands of kids and kids-at-heart packed the beach to enjoy the colorful show of kites, some larger than a school bus. 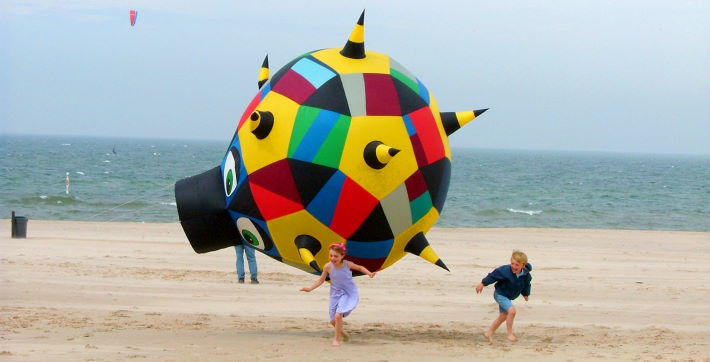 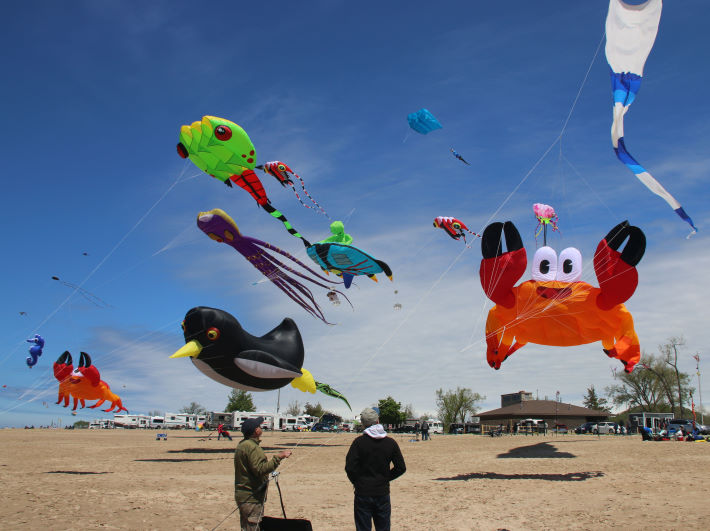 Finally, after three decades of organizing an event that was only surpassed in attendance by the Coast Guard Festival, the shop decided to take a well-earned break and retire the Great Lakes Kite Festival. It was an amazing trip whose destination could not have been guessed at thirty years before, and an incredible accomplishment by a small company of kite enthusiasts and the fliers who filled the sky above the beach.

On June 18, 2018, just one month after the final festival, Steve and Lynn were presented with a certificate recognizing their efforts at a Grand Haven City Council meeting. They had not been expecting such an honor, but it summed up their gift to the community eloquently and was the perfect endcap to the event.

If you were one of the many who came from out-of-town to watch the kites, the beach is still there, just waiting for you to visit and launch your own kite. And the shop's doors are open downtown, with so much more to offer than could fit into the tent on the beach.

Want to reminisce? Check out some photos of the event. 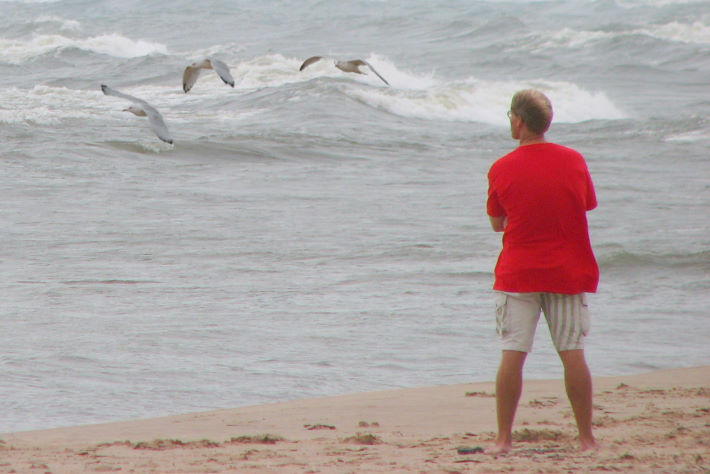 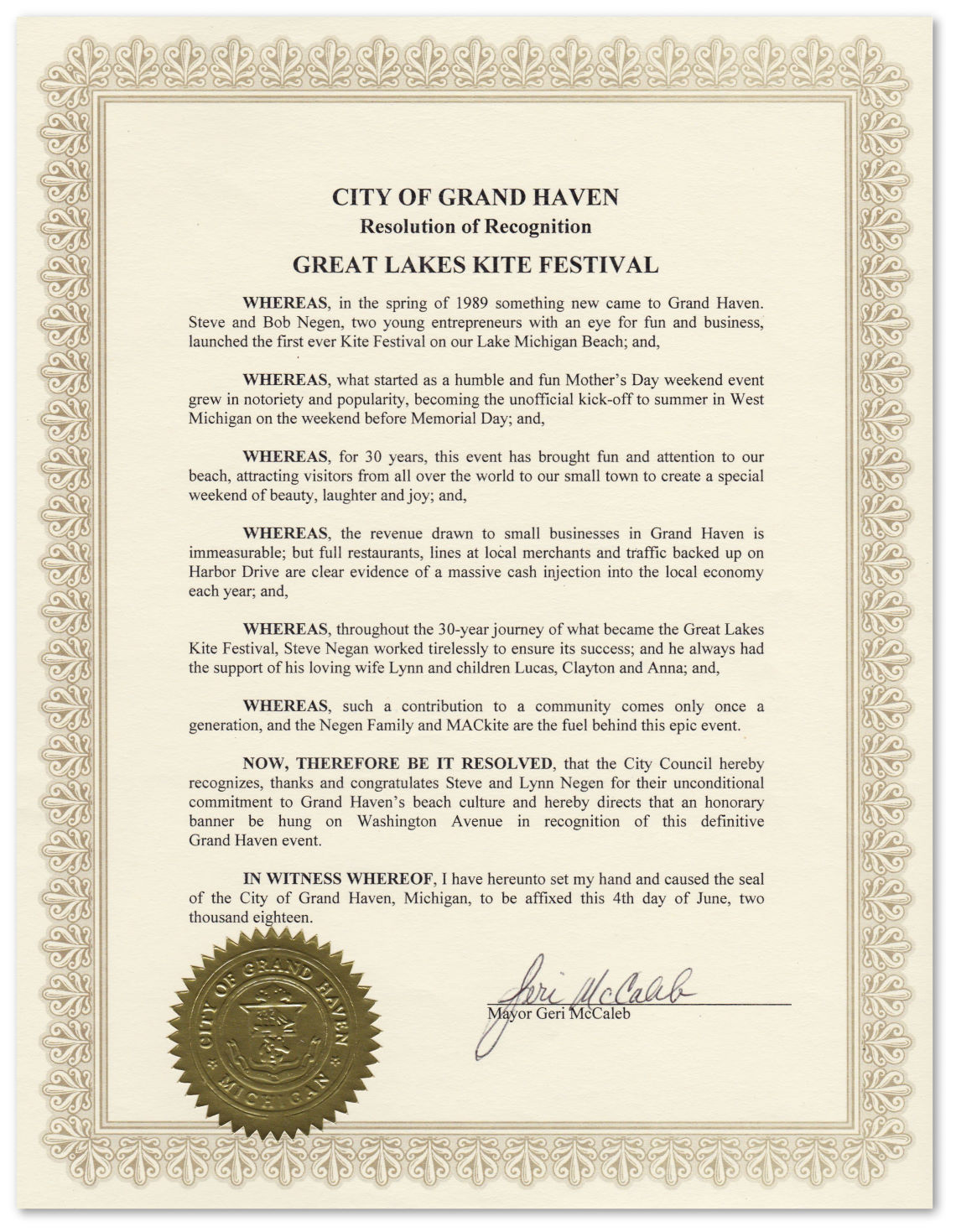